NEW ALBUM: The Song Is You

Lilly has released four critically acclaimed albums and the most recent, the duo album from 2017, Tenderly, feat. Gilad Hekselman, received an overwhelmingly positive response from the US, Germany and Denmark and was selected as TOP 5 BEST VOCAL RELEASE 2017 by The New York City Jazz Record.  In a review they a.o. wrote : “Tenderly is a truly superb recording, which rightly raises the expectations for her next effort”.

Now Lilly is ready with a new album! It was recorded on Aug 1st 2019 at Big Orange Sheep Studio i Brooklyn, New York. Gilad Hekselman performs again and on all ten songs. This time he generously shares his many versatile musical gifts on both acoustic and electric guitar as well as percussion and bodypercussion on a couple of songs. The cornetist, Kirk Knuffke, contributes with his eminent playing on seven songs.

This new album features interpretations and arrangements of eight well-known and lesser-known jazz standards, a new composition by Lilly, Five Wild Geese, and an evocative version of the trad. Scarborough Fair. It is characterized by the open mood of the recording day and a playful approach. It offers moods of both light and lightness, darkness and heaviness, glow, soul and swing. 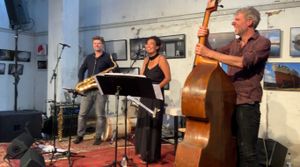 COPENHAGEN! ❤️
Looking very much forward to play this afternoon at JazzCup from 15.30-18 with these two wonderful musicians and human beings: Mads Ole Erhardsen (tenor saxophone) and Thomas Sejthen (double bass).. I HOPE TO SEE YOU ! 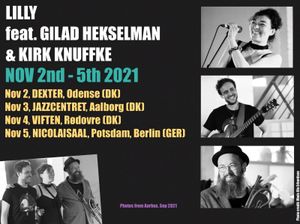 Two days after my first CD release in Japan.. I am VERY HAPPY to announce that I have been selected by an international jury from Japan, China and South Korea to be one of three new… 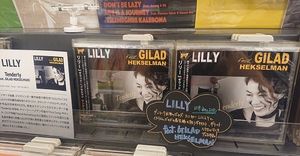 I am VERY happy and exited to annonce this! I released this album digitally in 2017 and it received rave… 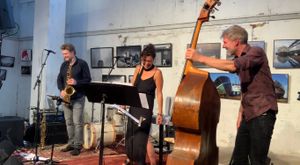 🎶✨🌊 What a beautiful first concert with these two fabulous musicians and an audience that gave us a standing ovation 💥💥💥 I am SO grateful! 🙏 Much love, Lilly ❤️ 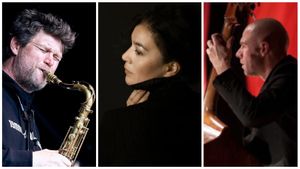 Don’t miss this brand new and exciting musical collaboration that can be experienced in the summer evening light for the first time! 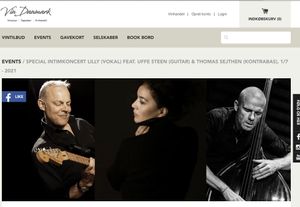 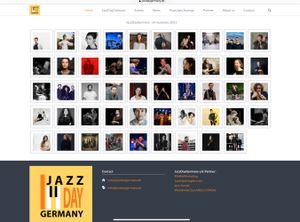 HAPPY INTERNATIONAL JAZZ DAY! 🎶🌎🎉 I am very happy and grateful to be presented by JazzDayGermay 2021 as one of 50 Jazz artists!🙏❤️

I am very happy and grateful to be presented as one of 50 jazz artists by JazzDayGermany that a.o. have this beautiful statement: “Together with musicians from Germany, German-speaking countries, many others from Europe and all over the world, we… 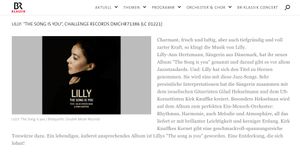 Thanks a lot, Bayerisher Rundfunk - Klassik / Jazztime for featuring and speaking so nicely and enthusiastically about my new album, The Song Is You, feat. Gilad Hekselman & Kirk Knuffke! I at least understood the word... „grossartig“ ☺️... but… 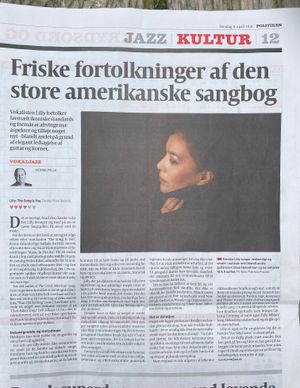 THANK YOU, Henrik Palle, for repeated listening and fine and whimsical writing about my new album, The Song Is You, feat. Gilad Hekselman & Kirk Knuffke in todays POLITIKEN! It's a lot more column space than I had dared to…

LILLY is a singer, songwriter and producer from Denmark who has received great reviews for making evocative songs of a rare kind and with a personal expression and sound. Her inspirations and influences are many and goes across genres like jazz, singer-songwriter, folk(lore) and pop. Her origins also cross borders, with a mother from Japan and a father from Denmark.

She has released four acclaimed albums with lyrics in English, Before The Crossing (2005), Love Is A Sound (2009). Her third album, and the first with lyrics in Danish, was titled Menneskeblomst (2016), a selfinvented word that means Humanflower. The album was made in close collaboration with the highly praised Swedish multiinstrumentalist Gustaf Ljunggren. On December 1st 2017 LILLY released her fourth album, Tenderly (feat. Gilad Hekselman), that received rave reviews from USA, Germany and Denmark, and was chosen as Top 5 Best Vocal Release by The New York City Jazz Record.

Lilly is educated from the Royal Academy of Music in Aarhus, Denmark, from the department of music & movement, and has played, recorded and collaborated with some of the finest, most talented and versatile creative musicians in Scandinavia, Europe and US.  Among others Lew Soloff (US), Aaron Parks (US), Gilad Hekselman (ISR), Kirk Knuffke (US) Gustaf Ljunggren (S), Anders AC Christensen (DK), Jonas Berg (S), Jeppe Kjellberg (DK), Thommy Andersson (S), Krister Jonsson (S), Jacob Fischer (DK) and others.

“Lillys and Hekselman’s arrangements reach almost the impossible of regenerating standards like the title track, “You Go To My Head”, “Skylark” and “Day Dream” to the point of ownership rather than reinterpretation”

“Tenderly is a truly supurb recording, which rightly raises the expectations for her next effort”

“.. listening to her, while she is being accompanied by Gilad - that has the stuff of legend” (....) Lilly’s authenticity is unsurpassable”

“A setup so simple and yet so complex. Phrasings filled with an understanding of space and pause. Guitar lines and vocal chords. Guitar chords and vocal lines. A symbiosis, a deep conversation, not chitter-chatter. Poetry sung tenderly.”

“His playing in “Skylark” urges this, all the intros, accompaniments and soli are unique works of art”. (...)“End result: This duo is a new, very tall, bright lighthouse in the variety of this kind of duo occupation”

“I am touched and deeply impressed by Lillys new album, Tenderly... So touched and impressed, that I have to say, that Tenderly is not only Lillys best release until date, but one of the recent years best Danish vocaljazzalbums!”

“Her voice is warm and calm, and she feels completely relaxed in this setting, using space as a sound..." (...) Hekselman delivers dainty intros like flowing drapery on a glistening “Skylark” and sparkling “Day Dream” while some creative pedal work creates a pastoral “You’re Everything. Gentleness and gentility at its best." ”