THANK YOU, Henrik Palle, for repeated listening and fine and whimsical writing about my new album, The Song Is You, feat. Gilad Hekselman & Kirk Knuffke in todays POLITIKEN! It's a lot more column space than I had dared to hope for ... and in 2021 with all the great music from amazing musicians released every single day! 💥🎶🌏 I'm happy and grateful to have the honor today 🤗🙏❤️

Link to review in the digital Politiken: https://politiken.dk/kultur/musik/art8144526/Hendes-nye-plade-kan-meget-vel-blive-en-af-forårets-favoritter

Here is a translation:

Vocalist Lilly interprets low-key iconic standards and manages to coax new aspects and add something new - thanks in part to elegant accompaniment by guitar and cornet.

It's brave what Danish vocalist Lilly tries on her latest longplayer. In more ways than one.

Firstly, it's cheeky to name the release after the standard 'The Song Is You', that wonderful 1932 ballad written by Jerome Kern and Oscar Hammerstein for the show 'Music In The Air'. For 55 years ago, another Danish (though Portuguese-born) legend, Pedro Biker, released an album of the same title - and it's an unobtainable cult classic, costing the same as a Y chair in a reasonably playable vinyl copy. So those are big shoes to step into, one must say.

Secondly, The Great American Songbook is such a thoroughly anthological phenomenon that one can get quite weary just thinking about yet another rendering of its greatest hits, 'That Old Feeling' (which Chet Baker delivered a somewhat definitive version of on 'Chet Baker Sings' way back in 1954) or the title track, which in addition to Biker also has a certain Frank Sinatra on the list of interpreters. Just to name a few.

Fortunately, you can pack your anxiety and ennui away in the drag box. For while Lilly may not revolutionize the way we look at the songs we know and love, she and her musical cronies perform them with an immediacy and a willingness to tune out the minutiae that actually makes them sound fresh and anything but spoiled. That in itself is a commendable achievement, when the field of both standards interpreters and jazz vocalists is so strong, historic and current.

Lilly, whose name on her birth certificate is Lilly-Ann Hertzman and who has several highly acclaimed albums to her credit, joins quite a broad musical stream as a vocalist: her bright voice and artless, clean delivery speak of kinship with Monica Zetterlund, our own Lise Reinau and other voices.

Her strength is not so much a strong swinging attack, but an ingratiating and melodic approach to the material. She sings the songs without deconstructive mannerisms or contrived rephrasings. And there's no need to knock her for that when we're dealing with evergreens that have long since proven their worth beyond the individual vocalist or arranger.

Guitarist Gilad Hekselman stands distinguished beside her with his extremely calm, pristine and thoughtful guitar playing. Like her, he doesn't strain unnecessarily to twist melodies out of joint, creating never-before-heard sounds and tones. In return, he creates low-key beauty that almost makes your eardrums spin like a cuddly cat.

It's just so delicious to listen to, and when cornet player Kirk Knuffke, who is no stranger to Danish jazz listeners, among other things because of his fine collaboration with the New Jungle Orchestra, joins in the fun with his discreet modernism and soft tone, the music lifts itself a level.

Very often the payoff is in the detail on second listen. As when Freddie Hubbard's - indeed, not just the most obvious stuff from the treasure chest of songs - 'Up Jumped Spring' is given some subtle colouratura as a musical counterpoint to the melody line. Elsewhere, listen out for Hekselman's percussion work, which is also both funky shit and elegant pulse underscoring.

Most original is probably the version of the folk classic 'Scarborough Fair', which makes most people think of the pop duo Simon & Garfunkel and their 1966 LP 'Parsley, Sage, Rosemary and Thyme'. But it's a good one to forget. Instead, the traditional song is served up in an ethereal-sounding version, with Knuffke's spiritual horn bringing to mind our own Palle Mikkelborg. Hekselman creates an edge, and everything blends into a wonderful whole.

Lilly is also a fine songwriter. And her 'Five Wild Geese' is an example of that.

It's a lovely record, nothing less. It may well become a regular on the stereo in the coming months, when the sun is gaining strength and the world is opening up, poof by poof, pleasantly but without chasing” 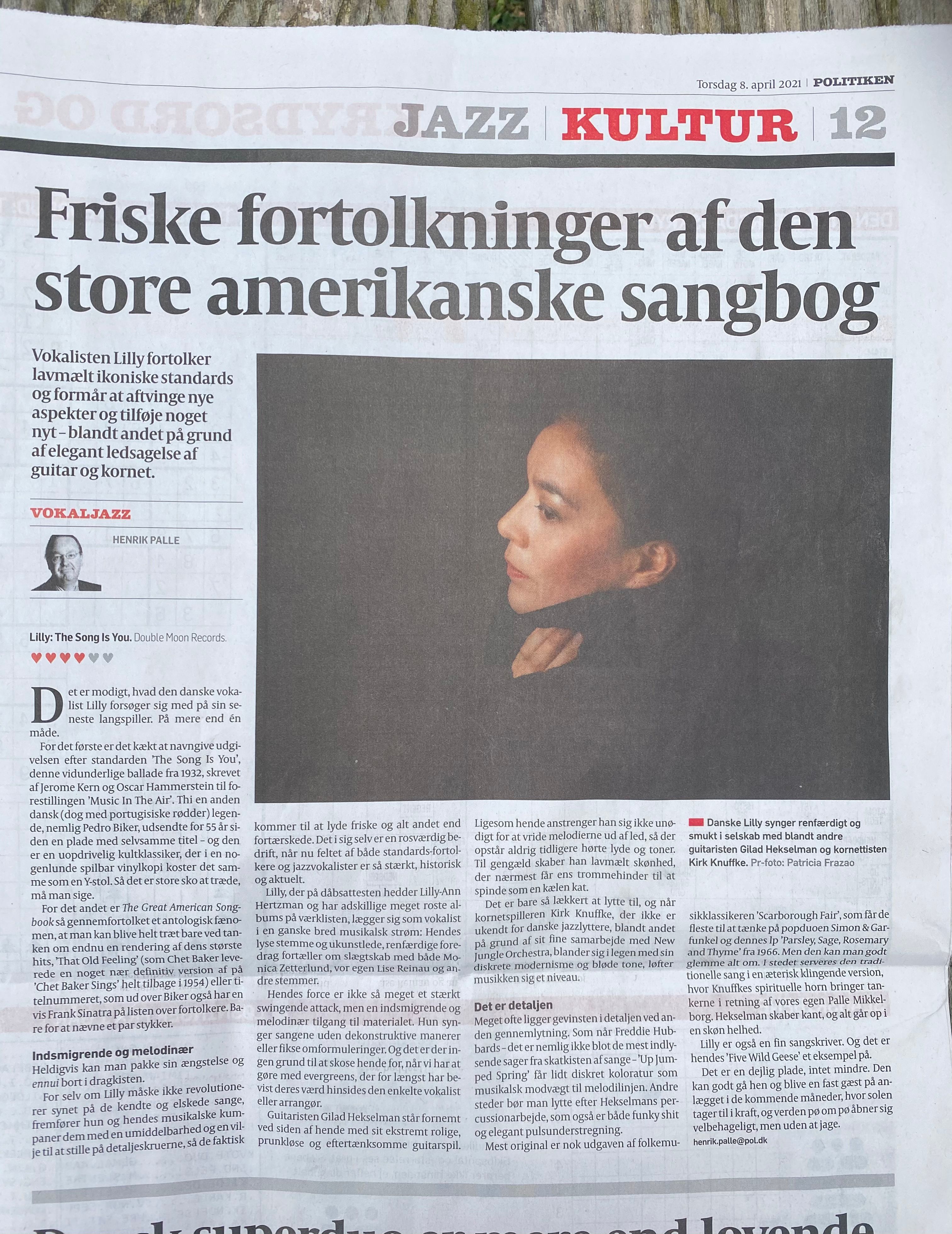